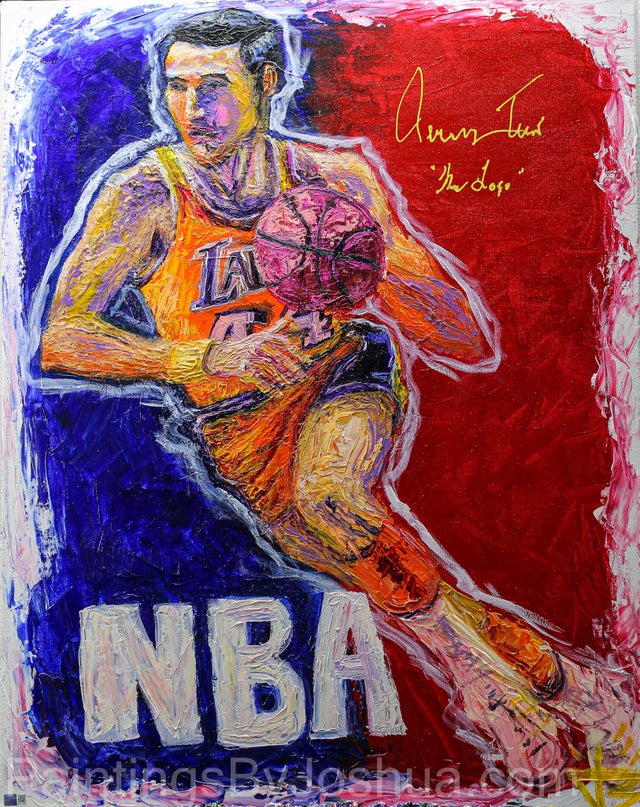 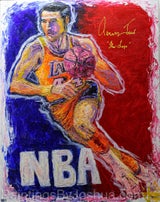 "The man depicted in this painting is one of the most legendary basketball players of all time---a couple of his nicknames are "Mr. Clutch" and "The Logo." His silhouette is LITERALLY the logo of the NBA. He's an NBA Champion, a 12 time All-NBA selection, a 14 time All-Star, 5 time All-Defensive team selection, and NBA Hall of Famer. My favorite accomplishment is that he's the only player in NBA history to be named the NBA Finals MVP despite playing for the losing team. Outside of his playing career, he's also one of the greatest general managers in NBA history. He was the architect of the legendary late 90's and 00's LA Lakers teams. He made the draft night trade for Kobe Bryant and lured Shaquille O'Neal away from the Orlando Magic (😭 .) Oh yeah, he's also the recipient of the Presidential Medal of Freedom (the highest medal that an American civilian can achieve.) Jerry West is truly a legend of legends in American sports." The autograph and inscription on this piece have been authenticated by Steiner Sports and was signed in front of one of their official representatives. Their tamper-proof hologram is affixed to the piece.

Enjoy the vibrant colors and textures of a true Joshua Blankinship Original.

This is an original, hand-painted piece by Joshua Blankinship. It was created with acrylics on stretched canvas. It was painted in Joshua's "impressivism" style with palette knives and brushes.

Worldwide Shipping! Shipping is free within the United States. If you have any questions or comments, please feel free to reach out to me. You can see more of my work and learn more about myself at www.PaintingsByJoshua.com

Sold out
Add to Cart